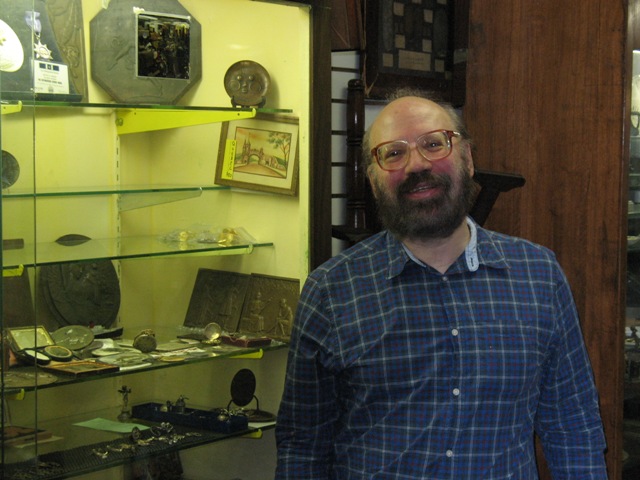 Vote for Hillary: PRECISELY because she's a woman

I was talking to my mom (Antoinette), mid-1970s. She was then a Suffolk County (Long Island) Human Rights Commissioner. “Women,” she says. “They’re their own worst enemy.” Ever the feminist, I correct her. “Not while there are men around.”
That momentary lapse aside, Mom’s feminist credentials were certainly the equal of mine. In 1990 she wrote a newspaper column (one of about 2500) defending Barbara Bush. It seems the girls at a college wanted Raisa Gorbachev, Ph.D as a speaker, and very pointedly did not want Barbara Bush, housewife (and First Lady). It wasn’t about Bush politics, it was about role models, and for these young women, Barbara didn’t cut it.
The petition, signed by 150 of Wellesley's 2,200 students, said in part, ''To honor Barbara Bush as a commencement speaker is to honor a woman who has gained recognition through the achievements of her husband, which contradicts what we have been taught over the last four years at Wellesley."
This was not an easy column to write. Mom recognized in Mrs. Bush a woman of her generation, who did pretty much everything she was supposed to do with the hand society then dealt to women. Women 40 years her junior did not think being “the woman behind the man” was an achievement. Almost certainly, they gave themselves too much credit, if they thought THEY would have become engineers and lawyers and heads of industry, if THEY were born 40 years earlier.
No one wants to be told that. As I said, not an easy column for Mom, that week. Sometimes, picking up the pen is sticking your neck out, begging for the albatross.
I wonder: If Hillary Clinton, Wellesley ’69, were Wellesley ’90, would she have signed that petition?
~~~~~
I sell rare coins for a living. With a store in NYC— Center of the Universe— and a back catalog of 30+ public auctions, it should not surprise that I deal in virtually every aspect of numismatics. Coins of all times and places. Art, commemorative, and military medals. Tokens and paper money. Seals. Deltiology. Orders and Decorations. Antiquities. Tribal Arts. Political buttons. Coins engraved as “love tokens.” In addition, I handle non-numismatic memorabilia and collectibles in many of the fields where medals are important (e.g. World’s Fairs, shooting festivals, Religion, Sports, Masonry, Memento Mori, Erotica, Autographs.…)
Given the breadth of the material I handle, and my astonishingly handsome features, it is little wonder that I have more women customers than other coin dealers. Maybe 15-20% of my sales are to women, which is likely ten times the industry average.
By dollar value, that percentage falls to maybe 1.5-2%—still way above the industry average. Obviously, if women spent more money with a dealer like me, my business would be the better for it.
Why aren’t women spenders?
Nothing will change #1, #2 & #3 more than having a woman running the country. Hillary’s presidency will put money from women in my pocket, while only microscopically reducing men’s spending power.
A Hillary presidency will, in short order, increase the place of women as leaders in government, industry and education—and in almost every other slot in our society. When fathers tell the daughters they love that they can grow up to be anything they want, Dad will finally have the credibility to make those words really matter. And male bosses will be more oriented to correctly assess the value women employees bring to the workplace.
Perception really does inform and change behavior.
Will a woman in the Presidency end sexism any more than Obama’s eight years have ended racism? Of course not. But it will gore the Beast within inches of its heart. And I will make more money.
~~~~~
Obama got 96% of the black vote in 2008, and black Americans voted in higher numbers than ever before. So how will Hillary do with women? Only a fool makes prediction in print. So here are mine.


So, what’s wrong with white women??  Why don’t they like Hillary?
“I just don’t trust her.”
Really? But you trusted all those male Presidential candidates? Or was it not the same, because… well… because they’re men??
I am not especially fond of Hillary, mostly because of political differences. (I am considerably to the left of Bernie Sanders; I see blood even on Jimmy Carter’s hands, and blood up to the armpits of three of his successors.)
Do I trust her? I trust her to be a President, wielding power with the prioritized goal of looking good as much as possible, her eyes ever on the 2020 election. On occasion, she will both have principles and be unwilling to set them aside. She will work incredibly hard and she’ll know the job like no incoming President since James Madison (1809-17). She will make America somewhat more popular around the world, as Obama has. If she gets majorities in both Houses of Congress, she will do a lot of governing, almost all of it an improvement over the status quo, some of it a tremendous improvement.
If the Republicans hold the House of Representatives, as is likely even with Trump on the ballot, little will get done.
The only guarantee is that The Ultimate Glass Ceiling will have been shattered. In my book, that counts plenty. It is as much A Moment in History as the Civil Rights movement, computers, the ’55 Brooklyn Dodgers, cell phones and Man—er, Person— on the Moon. Well, maybe not cell phones. (I hate cell phones.)
Somehow, for many women, this is not enough. They want a woman President, but just not this woman. They would rather wait for Maria Cantwell to make her move. The Perfect as the Enemy of the Good? No, but the roots of women’s resistance to Hillary are just as banal.
Part of this resistance is good old-fashioned woman-on-woman jealousy, with more than a dash of Fear of Success. Some of it is that old sociology staple, Self-Justification. Younger women—say, under 55-60—resent hearing about the battles older women have won for them. They fear their 21st century achievements, and the ego-boosts gained from them, are diminished if their heels are dug into giant shoulders.
I understand that a certain percentage of American women hate Hillary just as they would any other stick-figure Democrat. Parts of their world-view are different than mine, but many of these women are still nice people. Other American women are voting either for Trump or against Hillary because they are morons, or worse.
What concerns me is the number of women who could never vote for Trump, and rarely vote for any Republican, who might, for spite or from apathy, just skip voting in 2016. With this opponent, Hillary should get 75% of the women’s vote. That would make a statement, one that would measurably change the country.
It may not happen. Why?


Because: The older generation can’t change enough to elevate one of their number to the top of the heap.
Because: The younger generations can’t cast a vote that risks being an implicit THANK YOU to their mothers.


Because: Women. They’re their own worst enemy.